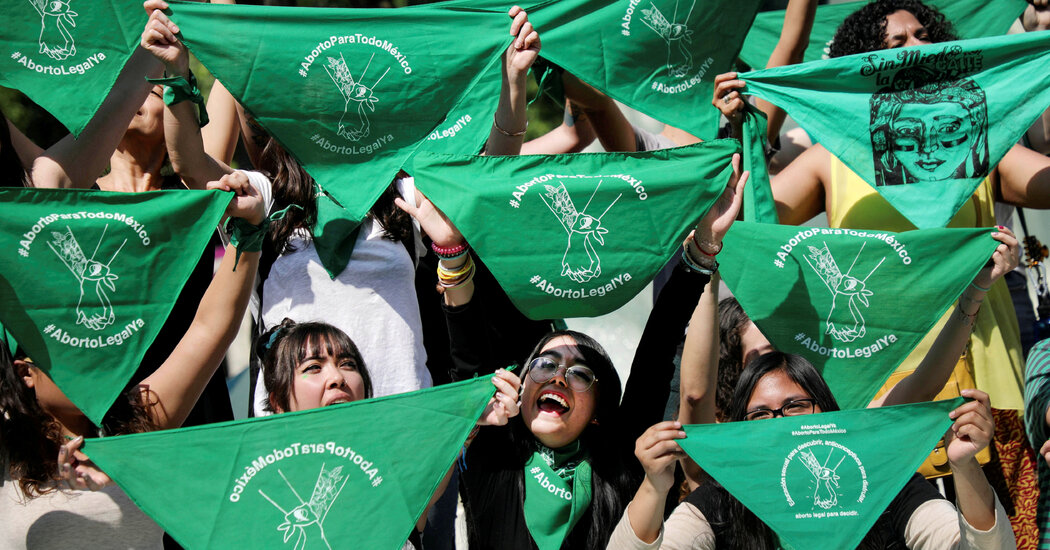 Growing up in a Catholic family outside Mexico’s capital, Mexico City, in the 1990s, I learned as a young girl that abortion was out of the question. When I hit puberty, the only representation I’d ever seen of abortion in pop culture was in the movie “The Crime of Padre Amaro.” In the film, the priest impregnates a young woman and then takes her to an unsanitary and illegal clinic. The abortion goes wrong; she dies. The message came in: I was sure that an abortion would lead to death.

Mexico received a new message this month. On September 7, Mexico’s Supreme Court judges unanimously ruled that it is unconstitutional to criminalize abortion. The court then stated:unequivocally, that our Constitution guarantees the right to choose. No Mexican woman or person of childbearing potential should be prosecuted for exercising her rights.

Even as feminists across the country celebrate this decision, we also need to recognize where credit is due. For more than 29 years, feminists have organized themselves into nonprofit groups such as: GIRE (where I work), Fondo María and Balance. Women have taken to the streets again and again throughout Latin America, demanding that our governments guarantee our rights.

Grassroots movements have changed the story and made more and more Mexicans realize that we need sex education to discover our bodies, contraceptives to enjoy our sexuality, and legal abortion to make our own decisions. (The motto in Spanish is “Educación sexual para descubrir, contraceptivos para disfrutar, aborto legal para decidir.”) The feminist movement has been pushing for years that abortion affects all women, regardless of social status.

When I left my home state of Puebla to study law in Mexico City in 2010, I learned that first-trimester abortions became legal in our country’s capital in 2007. From my feminist law professors, my fellow students, and I learned, often for the first time, about the right to choose, a right that our Constitution confers.

After Mexico City opened the door to legalization, states slowly followed suit. Oaxaca first came in 2019, and this year Hidalgo and Veracruz joined what feminists call the Marea Verde, or the green tide. But Mexico is a federation, made up of states. That means your rights depend on where you stand, a legal system very similar to that of the United States.

This month, the Mexican Supreme Court offered hope to all women and girls in our country. The judges said what has long been intuitive to feminist activists: that someone who is not yet born does not enjoy the same protection as someone who is already alive.

The court ruled that women and non-binary persons should not be criminally prosecuted for having an abortion. However, the decision does not translate into an immediate decriminalization of abortion in all states, as abortion is still a crime in 28 local criminal codes. The ruling means that no judge may send or punish women or non-binary individuals who exercise their right to terminate a pregnancy. In other words, technically a woman can still be taken to court and exposed in front of the community even though she wouldn’t face a jail sentence.

We are still early in the story of our rights in Mexico. Not being sent to prison does not mean that abortion is open to everyone. Women who live outside of Mexico City, Oaxaca, Veracruz or Hidalgo — the areas where abortion rights are most advanced — still have to travel to have an abortion. That limitation disproportionately affects those who are economically vulnerable. And in Mexico that is a huge limitation. In my country we say that poverty has a feminine face; of the 65.5 million women, 50 million are in poverty or at risk of economic or social hardship.

Feminist activists must continue to demand that their local representatives work on criminal law reform to eliminate those articles that consider voluntary abortion a crime. This is not only legally relevant: it is imperative to start eradicating the social stigma that still surrounds those who decide to have an abortion.

In Mexico, abortion has long been placed in the context of shame – just as I first learned from Father Amaro. This is finally beginning to change: Protests from abortion opponents have been kept outside the doors of the Supreme Court. But the prayer and protest seemed to have no effect on the judges’ arguments.

Now it is essential that the Mexican media and pop culture portray abortion as what it is: a right and a choice. I write this with the thought of all the girls who, like me, grew up equating abortion with death or prison. Thanks to the Mexican judges, this idea may begin to disappear. We must still fight to ensure that abortion is a safe, legal, accessible and free medical procedure.

In Chile, the feminist performance art collective Las Tesis created a feminist anthem that denounces violence against women and has become a theme song in the fight to legalize abortion. The chant quickly spread throughout Latin America. In the song “Un violador en tu camino(“A Rapist in Your Path”), Las Tesis denounced those who condemn us for being born women. The group first performed this anthem in Santiago in 2019 and it was soon sung all over the world, including hundreds of thousands in Mexico City. Days Before Supreme Court Ruling, Mexican Women Across the Country quoted this number on Twitter.

The Mexican Supreme Court and our judges have now sent a signal to the entire Latin American region, where women still face obstacles to having a safe abortion. From Argentina to Mexico, the green tide continues the fight for our rights.

Melissa Ayala is a lawyer specializing in constitutional law and feminist legal theory. She is the process coordinator for GIRE, a feminist organization working for abortion rights and reproductive freedom in Mexico City.

In Argentina, a political marriage of convenience is being undone